Of the eleven ballot issues, Colorado voters passed nearly all, and the result will be seen as more on the liberal than conservative side. But, the result was mixed. In two votes, more conservative fiscal forces won (lower the income tax and putting state fees under TABOR). But, the election also raised taxes on nicotine and homeowners with the repeal of the Gallagher Amendment. Also, paid leave will be a major expense for both workers and employers.

Some of the major trends were: 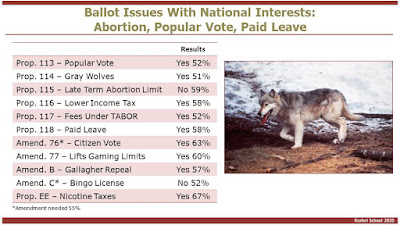