In Election Day interviews with Tom Green of 9KUSA and Jerry Bell of KOA, the extraordinary early turnout and expected record final votes were discussed.

Unaffiliated voters lead the early turnout (37%, see table below). The Monday before Election Day report shows nearly 2.8 million Coloradans have already voted by mail (a few in-person – 100,000), equaling the total 2016 vote of 2.8 million. Nationally, 100 million have voted by Monday in what experts predict heading for a record of more than 150 to 155 million total votes (135 million voted in 2016). 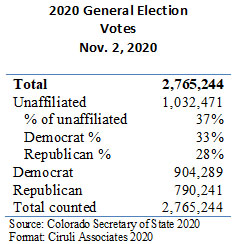 At this point four years ago, Republican returns were nearly tied with Democrats, and now they trail in third, 5 points behind Democrats. They may be following President Trump’s advice to vote on Election Day, which in Colorado means Republicans will drop off ballots on Election Day and with some (very few) standing in line.