Denver Sales Tax Decline Continues, But Some Improvement in May 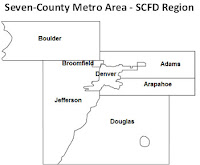 In the seven-county Denver region, sales tax collection fell 11.4 percent in April, but was down 7.07 percent in May, an uptick in revenue, reflecting some reopening in May. June revenue, which will be reported in August, should show the post-Memorial Day more robust reopening.

Cities and other agencies of local governments that depend on sales tax must be surprised and relieved that the initial plunge is retail business did not have the massive revenue impact expected. Some local estimates expected 20 to 30 percent declines.

The year-to-date revenue as of May was down 5.36 percent. SCFD revenue was about $24 million, down from more than $25 million in 2019, a substantial but not catastrophic loss (down $1,360,589). Will the retail, especially leisure and recreational, reopening stall in July due to outbreaks in the virus?