The Obama campaign strategy of targeting states has worked.  As reported on this blog on September 20, Barack Obama is still winning 8 of the 9 toss-up identified states.  North Carolina is a tie.  On the 20th, he was losing in North Carolina.

Obama began visits and massive advertising early in Colorado, and he now leads Mitt Romney by an average of three points.  As of September 21, Obama had been in Colorado campaigning ten times this year – a record number for any president. 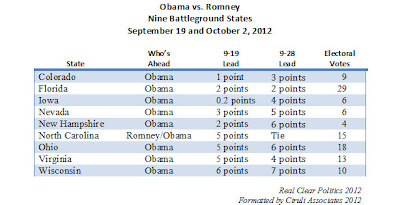 Looking at the electoral map, if Obama takes all the states Democrats regularly win (and current polls show substantial leads), he will have 237 electoral votes toward the needed 270.  Romney will have 191 by that criterion.  If Obama takes the eight toss-up states he currently leads, he would pick up 95 out of the 110 electoral votes in the toss-up list.  Obama would win with 332 electoral votes – down from his 365 in 2008, but still a 33-vote cushion.

This is why when the story of the 2012 election is told, and if Obama wins, his strategy of putting the bulk of his campaign in the battleground states and starting the visits and air war early may be seen as the key to his victory.