Fred Barnes, in a new article in the Weekly Standard, argues that Mitt Romney should win Colorado given its current election voter registration leans Republican and the strong 2010 Republican performance.  In fact, he argues Colorado may be essential if eastern states, like Ohio or Virginia, falter (see article).

Barack Obama has run only slightly ahead in Colorado all year.  And, his frequent visits and four-to-one advertising expenditures over Romney reinforces the view the state will be competitive.  But, in the last couple of days, Colorado appears to have joined the rest of the country in a surge toward Obama. 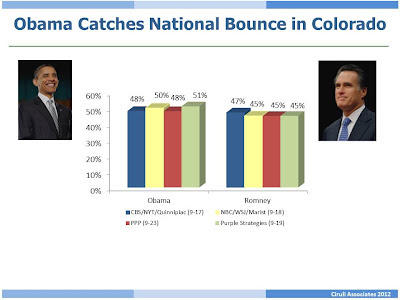 On Thursday, September 18, NBC/WSJ/Marist reported a five point Obama lead.  That reflected a major jump for Obama from three previous polls, which showed the race as break even.  Two new automated polls from Purple Strategies on September 19 (Obama up 3 points) and Public Policy Polling on September 23 (Obama up 6 points) appear to confirm movement toward Obama.