Xi, Putin and Trump Not Trusted Among World Democracies

In a Pew Research survey, the publics in 13 democracies – primarily in Europe, but including Japan, South Korea and Australia – rated presidents Vladimir Putin, Xi Jinping and Donald Trump at the lowest levels of trust and confidence that they would do the “right thing in world affairs.”

Mr. Putin would not be surprised or too concerned. He mostly controls his domestic opinion and his propaganda efforts (e.g., RT – formerly Russia Today) targets and undermines Western European and American democracies.

Although Mr. Xi’s gestures to woo democratic publics with well-crafted speeches appealing to democratic values and policies at the UN and Davos, he’s actually mostly interested in winning friends among the world’s autocracies for economic and strategic advantage. His primary argument is that China’s one-party dictatorship and authoritarianism is a success to be envied and emulated. 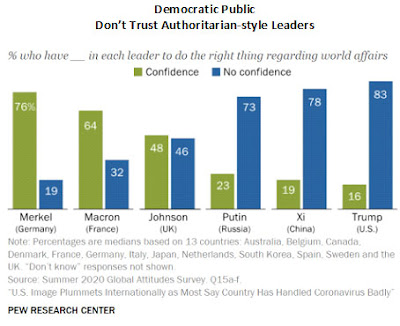 Of course, Mr. Trump has made clear his view that America has been a victim and has mostly been taken advantage of by its democratic allies. He’s not surprised by his lack of popularity. But as a reality TV star, hospitality entrepreneur and world brand manager, he must be concerned at some level at the impact of his American First, transactional approach to world affairs. This poll has an ominous message for his post presidency options. More importantly, it signals America is at the nadir of its respect and soft power influence in the world.