Israel, Another Democracy in Stalemate, Heads to Third Election

Israel, after two elections in 2019 (April and September), is still stalemated with the two main voting blocs unable to assemble a majority of Israel’s parliament, the Knesset (need 61 members out of 120). In authorizing a new election, Israel joins Great Britain, which just finished its fifth major election in three years (2 Parliamentary, 1 Brexit referendum, 2 European Parliament).

The March 2 election will likely again face-off Benjamin Netanyahu (Likud Party), who will remain as Prime Minister and under indictment, against his recent opponent, former Israeli Defense Force Chief of Staff, Benny Gantz (Blue and White Party). After two election failures, Netanyahu will face an intra-party contest, but no popular alternative has emerged. 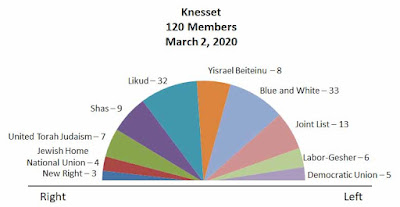 Unless something shakes up the political environment, the next 60-day campaign will sound like a replay of the last, with Netanyahu arguing only he can deliver more sovereignty and national security benefits, often with President Trump’s concurrence, and attack the Arab partners of the opposition. Gantz and the Blue and White will mostly focus on Netanyahu’s alleged crimes and his quest for immunity.
Posted by Floyd Ciruli at 10:21:00 AM