After a campaign that has been going non-stop for more than a year, the national polling average as the Republican convention enters its third day is one percent in Barack Obama’s favor.
Mitt Romney doesn’t need much of a convention bounce.  But, it needs to be enough to put him ahead of Obama on September 10, the Monday after the Democrat’s Labor Day convention ends.


“‘A lot of people are giving him a second look’ at the convention, says Floyd Ciruli, a pollster in the swing state of Colorado, adding that Romney needs to take advantage ‘because all hell is going to break loose a week later.’  That’s when the Democratic convention opens in Charlotte.” (Susan Page, USA Today, 8-24-12) 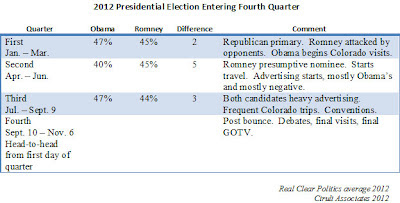 Gallup reports that some increase in a presidential candidate’s position is expected after their party convention, but that the respective bounces can cancel each other out and the net increase often decays.
Obama received a four-point bounce after this successful Democratic convention in 2008, but McCain exceeded it with six points after his Minnesota Convention and introduction of Sarah Palin.  Needless to say, the bounce was short-term and collapsed under the weight of the Lehman Brothers bankruptcy on September 15 and Ms. Palin’s poor interview performances.
In the two most recent presidential re-elections, the ultimate winners – G.W. Bush in 2004 and Bill Clinton in 1996 – both beat their respective opponents’ convention bounces.  John Kerry, in fact, lost ground after his convention (-1%) while Bush gained two points.  Bill Clinton gained five points while Bob Dole gained three.
Given the continued closeness of this race, a good convention producing a bounce could be the difference.  Romney probably has more room to move up, given he is less well-known than the President and has with some doubts to overcome, which Obama and his campaign have worked hard to raise.
See: