The July 6 jobs numbers are as weak as June’s.  The race did not tighten in June.  Will July be different?  Barack Obama has been ahead of Romney since January, ranging from six points to a tie on May 7.  His recent three-point lead has held up throughout June and, although it tightened to two points, it still seems impervious to the poor economic news.

That was a surprise and is a big problem for Mitt Romney. Historically, the strength of the economy measured by unemployment and direction were key indicators if an incumbent was going to be re-elected.

Unemployment is stuck at a high 8.2 percent and the direction flat. Are the polls struck or can Romney move ahead for the first time this year in the Real Clear Politics polling average? 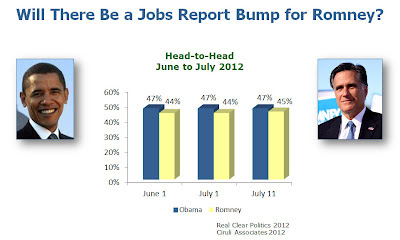 Although there are a multitude of alternatives for the November election, the current scenario is for the Democrats to pick up a few seats in the House, lose a few in the Senate and the President to be re-elected by two points.

A number of factors appear to be helping Obama and keeping Romney in second place.
G.W. Bush was ahead by three points in June in the 2004 re-election against John Kerry.  He won by three in November.  His problem wasn’t unemployment, but the war in Iraq.  The Bain attack is having the effect of the Swift Boat attacks, which was mounted by an independent group in the summer of 2004, but put Kerry on the defensive.  He never recovered.