Politics is Getting More Complicated, Nationally and Locally

Variation is also reflected in voters’ self-described political philosophy, which includes a contingent of strong ideologues leaning 2-to-1 conservative (9% strong liberal versus 18% strong conservative), and an overwhelming 70 percent of voters identifying themselves as middle-of-the-road or moderate leaning either right or left.

Although self-identified conservative and conservative leaning voters exceed liberals (strong and leaning) by 42 percent to 31 percent (see top row of table below), the middle-of-the-road voters clearly hold the balance of power in Larimer County and are prepared to vote for more liberal candidates under the right circumstances.

The 18 percent of voters who call themselves “pure independents” are also diverse in their ideological views. Nearly half (46%) label themselves “middle-of-the-road,” but 19 percent are “liberal” and 29 percent “conservative.”

National Poll
A recently released Pew Research Center poll describing a more complex, but similar comparison in national politics, laid out eight politically active groups blending Republicans and Democrats with political ideology and used a cluster methodology that incorporated demographic characteristics and issue positions. The Pew typology provides an update and revision of a similar type of survey conducted in 2005.

The major findings are that the U.S. political environment contains voters with strongly committed ideologies at each end of the political spectrum, and there is a growing middle of voters that hold strong views, but are hard to predict on a simple partisan or ideological scale. Nationally, in the Pew typology, there are more Democratic identifying voters than Republican (25% Republican and 40% Democrat leaning identifiers), and a third (35%) lean independent. 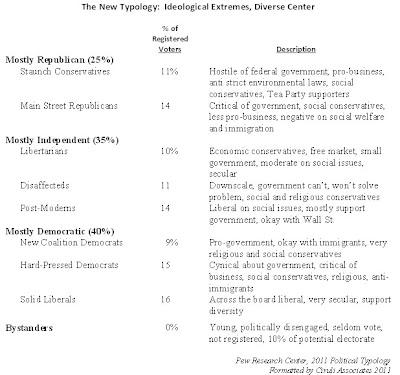 The conclusion from this analysis is that although America may be represented by two parties, in fact, there are more than half a dozen different variations on the parties.  And, there is a fragmented group that labels themselves and mostly behaves independent from the two parties, but has intense and eclectic political views.  It is a trend that is evidenced among Colorado independent voters. After uniting the factions that make up parties, the modern politician must compete for independents, many of whom have very “unmoderate” viewpoints on major issues.
Posted by Floyd Ciruli at 10:11:00 AM