Although the only competitive congressional election in 2020 was the Third Congressional District’s Boebert-Mitsch Bush contest, power and position among the entire seven-member delegation is shifting as the session begins on January 3, 2021.

On the Republican side, Lauren Boebert is now its most high-profile member and has a statewide constituency that could make her a strong primary candidate. Her out-of-nowhere win reminds every incumbent that they’re vulnerable to the Trump voter. But being a political power due to the Trump base also makes her unelectable statewide, at least in 2022. 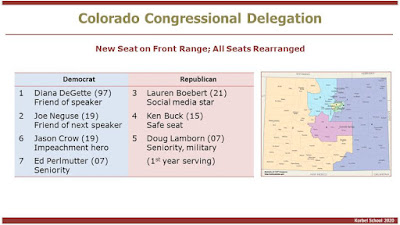 Ken Buck is likely ending his term as state party chair, a thankless job in a terrible year. But at least his seat is safe as is Doug Lamborn’s, who should the Republicans win the House in 2022 will be the senior member of the Colorado Republican delegation. History suggests they will win the majority. It will require picking up only 6 seats (222 D to 212 R), which is relatively easy for the non-presidential party in the first midterm. The average pick up since the 1940s in midterm elections has been more than 20 seats.

Diana DeGette is a favorite of the current speakers, but Ms. Pelosi could lose her speakership, and in any event, she is unlikely to serve another term (voluntary term-limit pledge). Does DeGette move on? It’s not fun to be in the minority, especially after your friend and mentor retires.

Joe Neguse is the friend of a future speaker or minority leader, Hakeem Jeffries, the Democrat’s Caucus Chair. He is now a ranking member of the House leadership having been just elected as co-chair of the House Democratic Policy and Communications Committee, making him the eighth position in House leadership. Another rising Democrat is Jason Crow, representing the powerful Denver South suburbs and being on the House impeachment team. Ed Perlmutter is well liked, in a safe seat and is likely to be in the House a long time.

Democrats rule Colorado in 2020 and are unlikely to be seriously challenged in 2022, but there are changes coming. Who replaces DeGette if she retires? Does Boebert represent the new Republican Party, even without Trump as president? Who do the Democrats run against her? Where will the new Colorado redistricting committee draw the lines for the state’s new district? How will it change the partisan make-up of all eight districts? What candidates will battle for the new congressional district?

No one but some party insiders and the D candidate cares who replaces Degette.
the voters don't as they will assume that all primary candidates are lefties.