It is not surprising that Rudy Giuliani, acting as President Trump’s lead attorney, was responsible for the event that put the failure of Trump’s legal strategy on the front page and in cable networks’ lead stories. It was encapsulated in one of the most bizarre and embarrassing press conferences in recent times. In quick succession highlighting the futility of the President’s strategy, a recount in Georgia was completed and Georgia and Michigan certified the results. Shortly after, November 23, the GSA, which had refused to authorize funding for the transition, relented, and Trump then ordered agency and White House cooperation. However, a week later, Trump continued to label the election a “massive fraud” and a winnable fight. 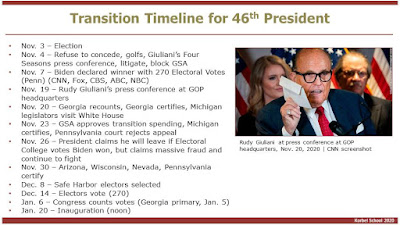 It became most clear that the Trump-Giuliani strategy was doomed when the Wall Street Journal’s board editorial turned against it in the weekend edition (Nov. 21-22). Peggy Noonan and Gerald Seib, the paper’s main established editorialists, then weighed in that he should take his successes and stop the damage to democracy and the Republican Party.

The media judgement was aligned with public opinion. Most voters (59%) believed the election had been “run and administered well” and that their vote had been “correctly counted” (88%). Joe Biden was getting positive ratings for his conduct twice as high as Donald Trump (62% to 31%) (Pew 2020).

Trump being Trump, of course, surrendered in substance when he ordered cooperation, but fought on rhetorically on Twitter and in the media. One place the technique worked was his mostly online legal defense fund, which raised $170 million since the election.