The Dow Jones stock average has just reached a milestone after one of the most tumultuous years in market history. On November 24, 2020, three weeks after the defeat of President Donald Trump’s reelection became widely accepted, the market managed to cross the 30000 level for a year-to-date gain of nearly 5 percent, which seems modest, but reflects an incredible rollercoaster since it hit 29000 on January 15, 2020 (see chart below). 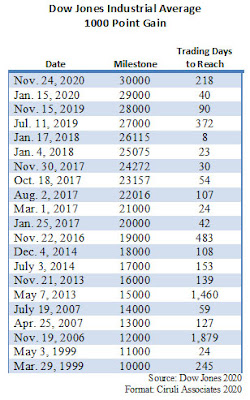 President Trump, of course, expected to ride the extraordinary market to reelection. He bragged about the market incessantly; told voters at rallies that “like him or hate him” the market is up and their IRA’s required reelecting him; and offered to presidential chronicler Bob Woodward, “how about that market?” when confronted with the impact of the pandemic, the deaths and the disruption on his prospects. Unfortunately for the President, the market ride was not smooth and his handling of COVID-19 – the primary disrupter – was judged mostly unsatisfactory.

Unfortunately for Trump, the market gave back the entire three-year gain and began what was seen as a bear market (20% drop after an 11-year bull market run) and the start of an assumed recession with unemployment equal to or greater than the Great Recession 2008 and 2009 (14.7% and still at 6.9%).

Surprisingly, in spite of the economic disruption with deaths of COVID-19 over 270,000; civic disorder after a series of high-profile cases of police-civilian violence; and a hostile, hard-fought presidential campaign, the market plowed ahead, mostly driven by the shift to technology, largely adapting to the new pandemic economy (NASDAQ up 39% YTD), low interest rates and trillions of dollars from the Federal Reserve and Congress.

Since November 2 (Monday), the DOW has risen 13 percent, from 26501 to 30046 on news of a successful election, a transition starting, multiple positive tests of vaccines and a signal of stability in financial management with the appointment of Fed Chair Janet Yellen to be Biden’s Treasury Secretary.

Dow Fires Past 29000, Yet Trump Struggles