The debate about Colorado being a two-party competitive presidential state is over for now. It moved from leaning Republican in presidential elections to Democratic in 2008 for Barack Obama’s big win (9 points). Even that performance was bested by Joe Biden’s crushing defeat of Donald Trump in 2020, 13 points, his second after a 5-point loss in 2016.

What’s unusual for Colorado and devastating for Republicans is the presidential losses are being accompanied by massive drops in voter support for other statewide Republican candidates and now local offices, such as county commissioners, sheriffs and clerks.

If Colorado is to be a two-party state, both national and local circumstances will need to change. 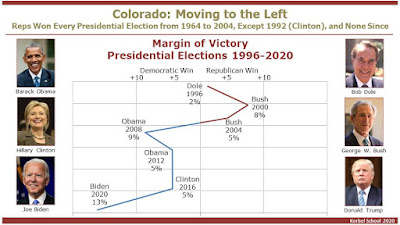 The GOP: Party of Hate® needs to die.
I will never vote for a GOPer again. Never.