President Trump has had a tumultuous presidency. He won in 2016 with only 46 percent of the popular vote; never had a honeymoon, in fact, his approval seldom reached 45 percent during the first term; and was impeached but not convicted. And finally, he joined only four presidents who lost second term runs in the last 100 years – Hubert Hoover (1932), Gerald Ford (1976), Jimmy Carter (1980) and George H.W. Bush (1992). 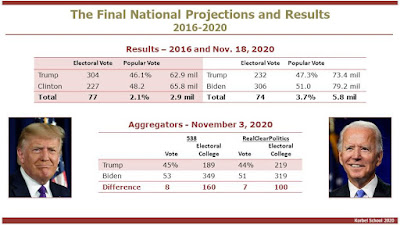 His team knew the re-election would be difficult, primarily because he never expanded his support. Consequently, early on they decided to ignore the popular vote and rather target a handful of states that could deliver a 2016-type Electoral College majority. Early in the year, he had a booming economy with a powerful online presence and a rich war chest.

Joe Biden’s victory was a significant defeat of an incumbent who was willing to use every instrument of the government to support his reelection and to campaign nonstop the last few weeks with his well-rehearsed message of “us against them.”

Biden doubled Hillary Clinton’s popular vote win from 2.9 million to 5.8 million and still counting. His electoral vote will equal Trump’s in 2016 (306), and most importantly, he defeated Trump in 6 of the 11 battleground states, whereas Clinton carried only one – Nevada. Biden carried Arizona, Georgia, Michigan, Nevada, Pennsylvania and Wisconsin.

Due to strengthened partisanship and polarization, landslides are more rare, but Biden’s nearly 6 million popular vote will exceed every candidate since 1996 (Bill Clinton vs. Bob Dole), except for Obama in his first win who generated more than 9.5 million votes. Even winning a majority of the popular vote is an achievement. Bill Clinton didn’t, nor George W. Bush in his first election, nor, of course, Donald Trump in his.

Biden prevailed in spite of a significant Republican advantage with the Electoral College. And although the President added 10 million votes since 2016, his percentage only went up slightly because Biden added nearly 13 million and overall turnout went up nearly 15 million votes. By 51 to 47 percent, a record 160 million voters opted for a change of government after 4 years of Donald J. Trump and brought along a 74 vote Electoral College advantage.