Voting Starts, Trump and Gardner Down. Time Running Out.

The latest 9KUSA-Colorado Politics poll ends the faint speculation that Cory Gardner’s final advertising and debate performances might close the senate race to within striking distance. The survey of 1,021 likely voters out of the field on October 6, three days before Colorado’s mail-back ballot voting started, showed Gardner behind John Hickenlooper by 9 points, about his average deficit since the race formerly began after the June 30 primary. Unfortunately for his senate career, Gardner is trailing President Trump, who has been spectacularly unpopular with a majority of Coloradans since he lost the state to Hillary Clinton in 2016 by 5 points. Gardner was never able to break out the twin challenges Colorado Republicans must deal with: the growth of a younger, more liberal electorate since his election in 2014 and Donald J. Trump. 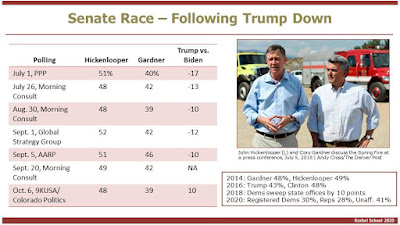 The poll confirms all the trends that have been burdening the Colorado Republican Party, especially since the 2018 landslide against their candidates. Gardner is losing women by 19 points, but only winning men by 2. He breaks even with voters 50 years old plus (44% R to 45% D), but loses voters under 50 by 17 points. He almost ties the Anglo vote (43% R to 45% D), but is crushed by Hispanic voters by 27 points, and they represent 17 percent of the estimated voting population. And importantly in Colorado, he’s losing voters who label themselves independents by 15 points and self-identified moderates by 19.

Gardner will carry Colorado rural votes 46 percent to 42 percent for Hickenlooper (16% of the statewide vote), but lose the suburbs by 4 points, which is more than half the vote (56%), and be crushed in the urban areas by 23 points.

This poll indicates that the senate race hasn’t changed yet, voting has started and there are less than three weeks left.