In 2001, the name of Mile High Stadium was a controversy and I conducted a metro poll for then LoDo restaurateur John Hickenlooper to determine if the stadiums’ name should be sold to a business or kept as “Mile High.” Two-thirds said keep the name. As Hickenlooper describes in his book, “Opposite of Woe: My Life in Beer and Politics,” that was the beginning of his interest in politics and his first success in changing a public policy. 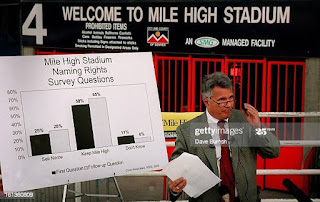