Donald Trump winning Pueblo, Colorado by 290 votes was an earthquake in local politics. The old Democratic stronghold had not voted for a Republican presidential candidate since Richard Nixon crushed George McGovern in 1972.

The Colorado Sun’s top political reporters, John Frank and Jesse Paul, recount the story of the Democrats’ failure in 2016 and the possible revival of the Democrats’ fortune this year. I told them that for the Third Congressional District race:

“I think Pueblo is the key,” said Floyd Ciruli, a Pueblo native and the director of the Crossley Center for Public Opinion Research at the University of Denver. 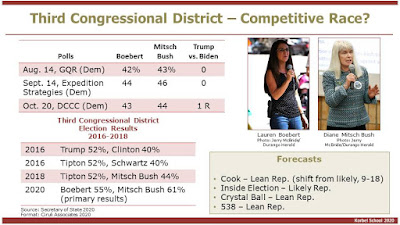 My view is that Democrat Mitsch Bush must reverse her 2018 loss in Pueblo (1,200 votes) to be able to counter Republican votes from Mesa and other Western Slope counties. (She lost the District to Scott Tipton in 2018 by 8 percentage points). The good news for Mitsch Bush is that another Democratic-sponsored poll shows the race dead even, with Trump only ahead of Joe Biden by one point.

If she can combine various outposts of progressive politics in Routt, Pitkin, San Miguel and Gunnison counties (home to the main ski resorts), she might just win it. In any event, it may be one of the few close races in Colorado Tuesday night worth watching