Although Colorado is now predicted to give Democrats an advantage in the presidential and senate races, will the state’s voters continue to be as conservative on tax and spending issues as they were in ballot initiative elections in 2018 and 2019? There are several on the ballot attracting considerable money and attention. In the Crossley Center chart below, funding amounts are from Ballotpedia. Three different polls are listed as indicated.

Proposition 116, the income tax reduction, has attracted more than $3 million in contributions and the only poll claims it is ahead 51 percent to 35 percent. Possibly the most expensive item on the ballot, Proposition 118 for paid employee leave, has received more than $7 million in contributions and two polls indicate it will win with about 60 percent of the public in favor.

Not surprising, the most complicated issue on the ballot, Amendment B, the Gallagher removal amendment, has few voters certain of their preferences. Only 39 percent make a selection in one poll. Proponents of removal have an advantage in funding of $4.7 million to only about $200,000 for opponents. But when there is doubt and confusion, a “no” vote becomes a final choice. (The CU poll offered two versions of the question. Both had more than 30% “don’t know.”) 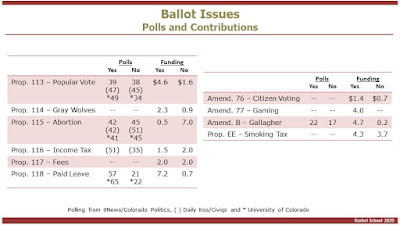 The 2020 ballot also includes a highly polarizing social issue, abortion, with Proposition 115 banning late-term abortions. It has attracted the most money – nearly $8 million, mostly in opposition. Early polls showed voters divided 42 percent to 45 percent, but with an advantage for opponents.

Another issue, paid leave has attracted massive out-of-state contributions of $7 million and is substantially ahead according to the polls.

Finally, national contributions poured into Proposition 113, a repeal of the statutory effort to leave the Electoral College with other like-minded states. Four million dollars out of a total of $6 million has been attracted by the popular vote out-of-state advocates.