Gardner Hits the Final Run Still Off the Pace

The August 30 poll from Morning Consult, the second in the last six weeks, brought bad news for Cory Gardner. He was 9 percentage points behind his Democratic challenger, John Hickenlooper, just as the race led into the final 60 days. An even more recent poll from AARP offered better news, but still showed Gardner down 5 points (51% to 46%) (9-5-20).

Gardner’s campaign and financial allies have been pouring money into advertising, much of it negative, in the hope of realigning the race. It has had a mixed result. In the Morning Consult’s July poll (7-12-26), the race had tightened to 6 points from a presumed 10 or more points in several previous polls before and after the June 30 primary. But then, they reported it as 9 points just before Labor Day.

As I commented recently, Gardner needs to show the race is closing or the party may begin to shift support to Republican incumbents in closer races, such as Thom Tillis in North Carolina, Steve Daines in Montana and Joni Ernst in Iowa.

The collective problem the entire Republican senate field faces is that the presidential campaign is stalled and 6 to 7 points behind nationally. Both of the latest Colorado polls have Donald Trump 10 points behind Joe Biden.

All the commentators on the poll mention that a Republican must win the unaffiliated voters to survive a statewide race in Colorado, and in the Morning Consult poll, Gardner is 23 points behind Hickenlooper by self-declared independent voters. He was 13 points behind in the earlier poll. The AARP poll reported voters 50 years old and older were 2 points in favor of Gardner (49% to 47%), a good, but not unexpected figure. However, it’s not good enough to make up for the difference among under 50 years old voters (52% Hickenlooper, 44% Gardner). 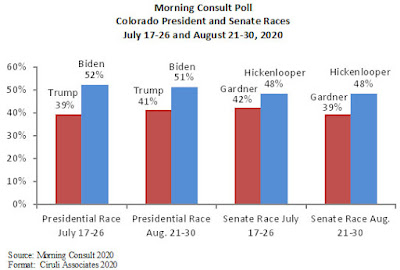 Read The Buzz:
Are National Republicans Giving Up on Gardner?
Senate Race Tightens
Posted by Floyd Ciruli at 12:49:00 PM