The Cook Report just shifted its rating of the Colorado Senate race to “lean Democratic” from “toss-up” (Sept. 23, 2020).

The weight of recent polls (Cory Gardner down 5 points in most recent), the weak position of President Trump in the state (down 10 points or more), and the short time until voting (Oct. 9) motivated them to the new rating.

As The Buzz featured on Friday, September 18, Cook stood out as the only forecaster that had the race a toss-up. The Cook Report follows The Buzz, and the postings reminded them a review was in order. 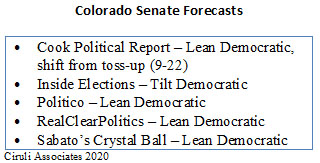 In general, it has been a bad week for Gardner. A rushed Supreme Court nomination is not a positive campaign narrative for Gardner, reinforced by a high-profile criticism by the Denver Post editorial page on his change of position from four years ago.

The Cook Report rating was another setback just as Cory Gardner was attempting to change the perception of a race that was over as it begins the final six weeks.