The Senate defeated an economic stimulus proposal just as the American people reported it as their top priority and as the August economic report showed the pace of the recovery has slowed. In its top political issues for voting, Pew reported on August 13 that the economy was the most important issue for voters it tested, attracting 79 percent.

Although the overall unemployment rate dropped to 8.4 percent from 10.2 percent in July, the biggest news was an increase in reported layoffs and furloughs becoming permanent. Announcements of planned corporate layoffs has mounted with United Airlines – 16,000, American Airlines – 19,000, MGM – 18,000, Coca-Cola – 4,000, Marriott Hotels – 100,000 and Boeing – 6,000. The Federal Reserve confirmed the need for more stimuli, from Chairman Jerome Powell, to numerous board members, such as Charles Evans, president of the Chicago Federal Reserve Bank, who said: “Partisan politics threatens to endanger additional fiscal relief…a very significant downside risk to the economy today.” 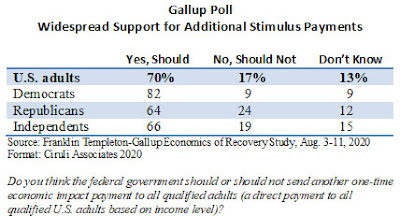 Both parties need to find a compromise. The public was also generous on the size of the payment, with majorities of both parties supporting payments of at least $600 per week.
Posted by Floyd Ciruli at 10:25:00 AM