After Three Years of Decline, U.S. Image in the World Collapses in Last 12 Months

Since President Trump’s first days in the White House, his “America First” rhetoric and policies have alienated world leaders and their citizens. In a Pew survey of the public in 13 democracies, all U.S. allies, the U.S.’s reputation and that of Trump have dramatically declined. America’s poor image of handling the COVID-19 crisis has contributed to the collapse. 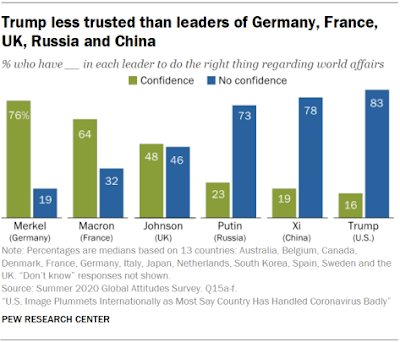 The loss of respect in the world represents a major strategic error of the last four years. A former Secretary of Defense, James Mattis, said when talking about the long-term challenges of terrorism and the need for allies:

“They were alongside us because they shared the values, the sense that terrorism was a threat to everyone. So when you go into these kind of situations, you need every ally you can get your hands on. You need all of them. You need their votes in the United Nations. You need their troops on the ground.”