Trump’s Approval in Colorado is Below National Average, Hurt by Handling of Coronavirus

Trump lost Colorado by 5 points in 2016, and according to this poll, he has gained no apparent support from Clinton voters (only 3% approval), and he is losing self-identified independent voters, which are 38 percent of the sample and 40 percent of registered voters, by 23 points.

Other major deficits for Trump outside of partisanship were women, voters under 46 years of age and of Latino ethnicity. 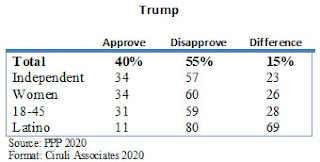 His handling of the coronavirus has 49 percent of Colorado voters in “strong disapproval” and only 29 percent “strongly approving,” a 20-point negative spread. Most Democrats (85%) “strongly disapprove” of Trump’s handling the virus, but Republicans are more conflicted with only 62 percent “strongly approving” his performance and 25 percent only “somewhat approving.” Democrats are almost entirely united in their disdain for his performance, but Republicans are more ambivalent in approval. The most critical group in Colorado’s elections are independents, and they are two-to-one in “strong disapproval” of Trump’s COVID-19 performance (49% strong disapproval to 24% strong approval). He’s also in negative territory handling the economy, but less so (36% strongly approve and 45% strongly disapprove).
Posted by Floyd Ciruli at 1:01:00 PM