Since the last Twin Towers report on July 13, California, which had been fifth in COVID-19 fatalities, moved to third, and Texas leapt over a host of states to become fourth, with Florida following it at sixth, and likely to move up the next 30 days as total deaths have kept a steady pace of increases. Fatalities were up 22,000 from mid-June to July and 26,000 since mid-July to August 12 to a total of 168,000. 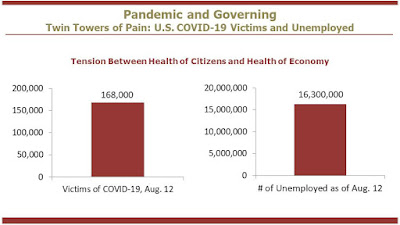 Although treatments are improving and fatality rates declining, the sudden flare-up after re-opening has spread anxiety about controlling the virus and undermining the confidence of individuals, business and government decision-makers on gauging the safe path to pre-COVID-19 activities. Reconvening schools and athletics and restarting the hospitality and recreational industries have been especially affected.

The unemployment rate in July compared to June went down to 10.2 percent from 11.1 percent in June. That remains a record high, near the top rate in the Great Recession of 2008-09 (10.0% Oct. 2009). Although 1.8 million jobs were added, that was lower than the 4.8 million in June and very few were in goods producing manufacturing.

The recovery was slowed in Florida, Texas and Arizona due to their spikes in COVID-19. The nationwide recovery is now being affected by the growing view that major labor market growth will depend on businesses having confidence that consumer demand will be steady and employees will feel safe. The spikes have reduced confidence, required some rollbacks, and extended the time required for the recovery. The most commonly heard comments are about the lack of national leadership, including the recent failure to extend unemployment payments and federal funding for schools and state and local governments.