Will the Presidential Race Tighten?

The President and his campaign are attempting to adjust to the reality of nearly two months of polls – both national and battleground – that show him losing well beyond Hillary Clinton’s polls at the same time in 2016 and upwards of twice the margin of error.

President Trump has been a few points behind Joe Biden since early in the year, but it was after Memorial Day that the spread expanded, settling at 8 points on June 17. It rose to 10 and is currently at 8. Trump remains highly unpopular, with a 43 percent approval and a negative 55 percent (12% deficit). His party is down 9 points in the generic ballot test and only 23 percent of the public believe the country is moving in the right direction. 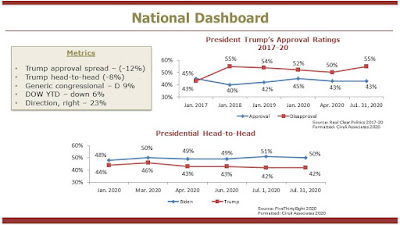 But, will the polls tighten? Yes, for several reasons:
Could Trump Win?

No, not with these numbers, but many things could happen in the last 95 days. Biden has kept a low-profile, but soon will decide a vice president, direct a virtual convention and debate. All of the activities have possibilities of mistakes.

Finally, there’s the completely unexpected: the Comey, WikiLeaks, Access Hollywood type of event that caused a major turbulence in 2016.

So hang on. The polls may be correct today, but they can and are likely to change, especially in a year where a pandemic and George Floyd-type of events dominate and so many historic political and presidential norms have been broken.
Posted by Floyd Ciruli at 1:11:00 PM