The 2020 primary with Colorado’s convenient mail-back ballot system and encouraging participation from the state’s largest bloc of unaffiliated voters exceeded the turnout in the competitive two-party race for governor in 2018 by more than 300,000 votes (1,171,000 in 2018). This year, only Democrats had a competitive race for senate, but still 565,000 Republicans voted for a total 1,577,347 votes (Secretary of State claims 1.6 voted, but a few have not been posted as of 3:00 pm, Wednesday, July 1). The state’s mail-back system can handle presidential-level turnout as it did in 2016 (2.6 million). 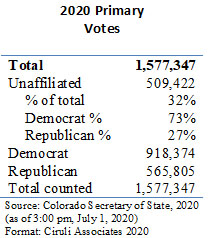 Presidential years attract greater registration and voter participation. More than 1.8 million voted on Super Tuesday. But, a lot of credit goes to John Hickenlooper’s early stumbles. More than $10 million was spent in broadcast and digital ads, most of it for Hickenlooper. Big money tends to track with bigger turnout. It helped him hold the lead people assumed he had, but appeared to be losing by the ethics controversy and gaffs.

This report will be updated as the Secretary of State releases more data.
Posted by Floyd Ciruli at 4:18:00 PM