AMLO has lost popularity in recent months (he’s 19 months into his 6-year term) due to the economy, COVID-19 and crime, but is in the upper 50 percent range and more popular than Trump, who hovers in the low 40s. AMLO is taking considerable criticism coming to see Trump. However, he is fond of political theater that confounds his critics and fits his image of an iconoclast.

Also, AMLO will be in D.C. without his northern colleague, Canadian Prime Minister Justin Trudeau. The Canadian, a more traditional politician than AMLO, has a variety of scheduling excuses, but observers believe, like most longtime American allies, is simply avoiding the discomfort of dealing with Trump’s personality, the embarrassment of his likely off-the-cuff comments and the inevitable political criticism at home.

Meeting with Trump will not play well with the citizens of Mexico or Canada, who according to the latest Gallup Analytics Weekly (6-30-20), has extraordinary little credibility in either country. 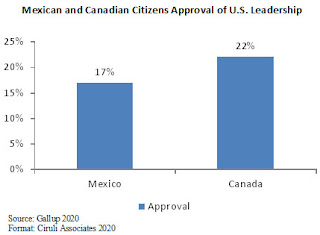