The Colorado Secretary of State reported a total 1.8 million voted in the presidential primary, with more than 100,000 ballots still to be processed. The vote for Democratic candidates was 1,082,788 and Republican 674,217, or nearly 400,000 more Democrats and unaffiliated voting in the Democratic primary. Based on an Election Day report on turnout, 613,485 unaffiliated voted nearly three-to-one Democratic (401,943 Democrat to 140,598 Republican). 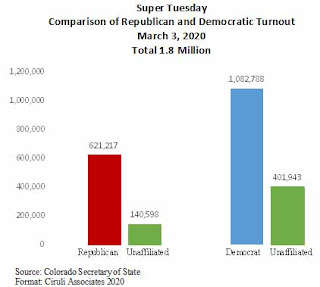 The 2020 primary turnout exceeded our expectations.