CNN must be short of news. It was expected since Election Night that Bernie Sanders beat Joe Biden and the field on March 3rd Super Tuesday’s primary. California’s convoluted voting system, which allowed people to “mail” ballots through Election Day, produced the 10-day delay.

The percentages didn’t change over the long count (34.0% reported on Election Night to 34.3% Friday, March 13 for Sanders, 27.2% to 27.7% for Biden). So goes California, so goes little else. Recall, California gave Hillary Clinton a 4 million vote advantage. But Super Tuesday had a major impact on the national standing of the candidates in the Democratic presidential race.

On March 2, as the shift from the South Carolina primary and the Pete Buttigieg and Amy Klobuchar endorsements sent in; Biden, who had been behind Sanders by more than 10 points, ties him; then Biden jumps to the lead on March 3. He now dominates by more than 20 points. 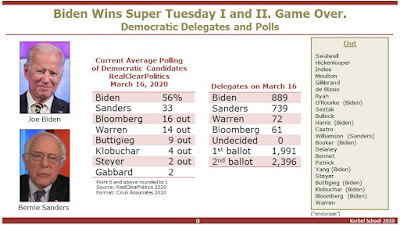 See The Buzz: Super Tuesday: Two-Person Race, Biden in Lead
Posted by Floyd Ciruli at 9:44:00 AM