The Dow is about to give back the entire gain since Donald Trump was elected November 8, 2016. At the time, the conventional wisdom was that Trump’s surprise victory would upset a market reconciled to an extension of the Obama/Biden economic policies. Trump was an unknown, a disrupter, but almost immediately the shock of his victory turned to investor elation anticipating tax cuts and deregulations. 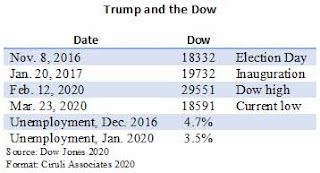 President Obama had a good track record with recovering from the great recession, producing an up market and lower unemployment. The Dow was 7949 on his inauguration day in January 2009 and unemployment at 10 percent. As he left office, unemployment was down to 4.7 percent and the Dow had more than doubled as it gained 10383 points. 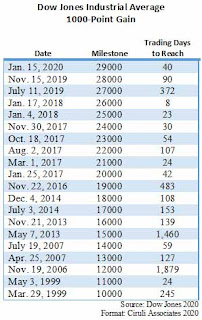 Although President Trump may not be blamed for the coronavirus recession, he had planned to run on the buoyant market and low unemployment to make up for deficiencies in his personality and presidential temperament. Trump’s campaign, realizing the danger in the changed circumstances, are now casting him as the leader in a great patriotic effort to rally the country and direct the virus war effort. They are also arguing that only he has the experience and track record to rapidly bring the economy back to life. It may be the only strategy available given the circumstances, but running an incumbent president’s reelection in a recession with stress on local government budgets and high unemployment is a nightmare.