From the 28th of February (South Carolina primary), through March 3rd (Super Tuesday), to March 11th (Michigan et al. primary), Democratic voters made Joe Biden the presumptive nominee. He was left for dead after the Nevada primary (30-point loss to Bernie Sanders), and now the only discussion is how and when does Bernie Sanders exit the race – not easy for a lifelong professional politician who is unlikely to mount another run at 83.

But, the numbers are foreboding for Sanders – Biden now has a 17-point national polling lead. He has been endorsed by six of his leading rivals to one for Sanders (Williamson) and he has a 150-delegate advantage, or over 40 percent of the 1,991 votes he needs for a first round nomination. And, the next round of events are no better than the most recent. Sanders is behind in polls by double digits in Florida, Illinois and Ohio.

Sanders’s colleagues – the party’s elected officials, most of whom he has spent his life ignoring or denigrating – are now going to begin to call for him to stop the attacks and join the effort to defeat Donald Trump. 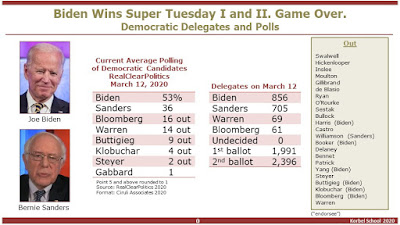