In The Buzz (2-27-20) and on KOA Monday, I predicted 1.2 to 1.5 million voters on Super Tuesday, and most of the late votes would be from Democrats and independents voting in the Democratic primary. As of Tuesday morning, 1.3 million returned ballots – 250,000 Democrats to 113,000 Republicans since Friday. 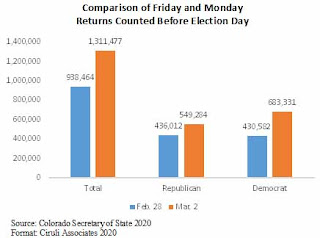 The over 410,000 unaffiliated who have turned out, voted more than two-to-one Democratic (231,128 Democrat to 103,240 Republican), likely good news for Bernie Sanders, the leader in the state’s polling.

But, many of the final 600,000 or so votes cast after Friday knew about the Joe Biden blowout in South Carolina. Those making decisions the last two days will know about the dropping out and endorsements by Pete Buttigieg and Amy Klobuchar, which may also help Biden.

Second in the polls has been Elizabeth Warren. Will she reach the 15 percent threshold to win delegates?
Posted by Floyd Ciruli at 1:16:00 PM