Colorado joined California and a small select list of Bernie Sanders states on Super Tuesday. It confirms Colorado’s image of the state becoming more California-like. In fact, a quick look at the results of the top four candidates would place Colorado more liberal than California. Of course, in Colorado, unaffiliated voters can vote – and more than 350,000 did for Democrats. (Ballots are still being counted in both states.) 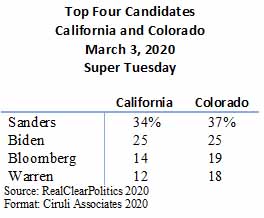 Combining the California and Colorado Sanders-Warren votes show 46 percent of California Democrats on the left whereas in Colorado, the number is 55 percent on the left. Colorado had a few more moderate Democrats who voted for Bloomberg and Biden than California (Colorado 44% to California 39%).

It suggests a couple of political observations: