Iowa has a history of springing surprises. The 2016 Hillary Clinton-Bernie Sanders smash-up foretold a long battle. Barrack Obama’s 2008 win and charismatic victory speech set the stage for a two-person contest that went to June and John Kerry’s 2004 late surge and Howard Dean’s collapse propelled Kerry to the nomination. 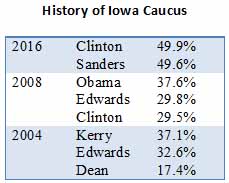 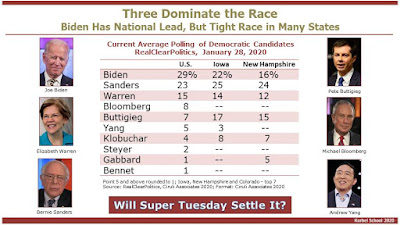 Note that Michael Bennet, who abandoned any chance in Iowa and campaigned non-stop in New Hampshire, captured one percent in one of the three latest polls, all of which had Sanders in the lead.

Nevada (Feb. 22). In Nevada, Biden holds a 6 percent lead ahead of Sanders, but recent polls have it closer. The state has trended more Democratic in recent presidential elections and now 30 percent of the population is Hispanic.
South Carolina (Feb. 29). Biden has been ahead of the field in South Carolina and is now up 19 points over Sanders, largely because of steadfast African American support. This is the state Tom Steyer’s millions in spending has gotten him 8 percent and into the next debate.
California, Texas and 14 others states (Super Tuesday). California is the big prize on Super Tuesday (Mar. 3) with 415 delegates. Recent polls show the field reflects national trends, with Biden, Sanders and Warren in a tight three-way race. The latest Berkeley IGS poll has Sanders up by 6 over Warren with Biden in third. Texas, with 228 delegates, has been Biden’s county so far with a 12-point advantage over Warren, but polls are from December.

Although, today it appears a Biden vs. Sanders race for delegates, a surprise in Iowa or other early states could boost Sanders to a formidable lead or give Warren the momentum she currently lacks or even raise one of the second-tier candidates to stardom. And, of course, the billionaires are likely to stay in for a while regardless of the March 3 results.
Posted by Floyd Ciruli at 10:08:00 AM

Hello, I am Theresa Williams After being in relationship with Anderson for years, he broke up with me, I did everything possible to bring him back but all was in vain, I wanted him back so much because of the love I have for him, I begged him with everything, I made promises but he refused. I explained my problem to my friend and she suggested that I should rather contact a spell caster that could help me cast a spell to bring him back but I am the type that never believed in spell, I had no choice than to try it, I mailed the spell caster, and he told me there was no problem that everything will be okay before three days, that my ex will return to me before three days, he cast the spell and surprisingly in the second day, it was around 4pm. My ex called me, I was so surprised, I answered the call and all he said was that he was so sorry for everything that happened that he wanted me to return to him, that he loves me so much. I was so happy and went to him that was how we started living together happily again. Since then, I have made promise that anybody I know that have a relationship problem, I would be of help to such person by referring him or her to the only real and powerful spell caster who helped me with my own problem. His email: {drogunduspellcaster@gmail.com} you can email him if you need his assistance in your relationship or any other Case.
1) Love Spells
2) Lost Love Spells
3) Divorce Spells
4) Marriage Spells
5) Binding Spells
6) Breakup Spells
7) Death spell
8.) You want to be promoted in your office
9) want to satisfy your lover
10) Lottery
Contact this great man if you are having any problem for a lasting solution
through {drogunduspellcaster@gmail.com}