The next major event planned by the DNC in the race for the White House is the LA debate, December 19. But, the debates have had little effect on the polling positions of the field. The candidates themselves have been making more news with their exits (Kamala Harris) and entrances (Michael Bloomberg).

The national polling numbers have stabilized after the boomlet for Pete Buttigieg moved him to fourth nationally. His ascendance appears a reflection of his success the last couple of months in Iowa and New Hampshire where he is now in first place. He has benefited from some slippage in Democratic voter support by Joe Biden and Elizabeth Warren. 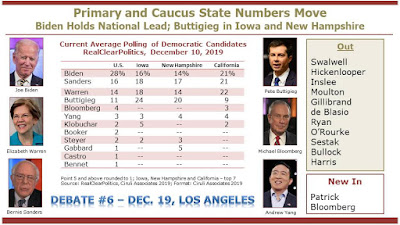 It now appears that the top four will be maneuvering for momentum and advantage for the next two months as the February 3 Iowa caucus approaches.
Posted by Floyd Ciruli at 1:30:00 PM