As The Buzz predicted on October 15, President Trump would be indicted. It was based on the steady growth of Democrats who supported impeachment after the Mueller Report (July 24, 2019) and the summer of obstruction. Support became near unanimous after the publication of the Ukrainian whistleblower documents of Trump’s call with President Zelensky (July 25, 2019).

The House vote to authorize the impeachment inquiry (House Resolution 660) was 232 to 196, with 231 Democrats voting “yes” and two voting “no.” All Republicans present voted “no.” 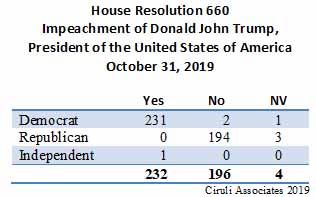 The vote to accept the articles of impeachment and conveying them to the Senate was similar to the October 31 vote. The management of Adam Schiff, Jerry Nadler and Nancy Pelosi of several weeks of testimony and design of the articles strengthened the Democrats’ resolve. Republicans are unified in opposition, but divided on their lines of defense. The vote is a good reflection of the American political divide as 2020 begins. 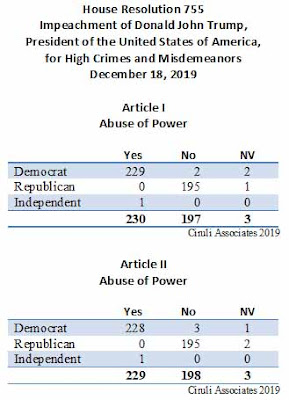 See The Buzz: The Impeachment of Donald John Trump, President, House Resolution 660
Posted by Floyd Ciruli at 10:23:00 AM