Celebrity, populism and nationalism were all elements of Boris Johnson’s and Conservatives’ big win. Johnson’s personality, style and slogan, “get Brexit done,” dominated and connected with voters’ hostility toward the British elite, the frustration with the parliamentary gridlock and the anxiety of being left behind in the face of globalism. On the positive side, Johnson argued he was fulfilling the nation’s democratically-expressed choice and unshackling the British spirit.

Although the result doesn’t end the division in Britain over Brexit, it gives the Conservatives the power to promote their policy agenda and specifically to bring Brexit to an end sooner and probably “harder” than most of the alternatives. Also, it’s a major blow to the far-left in the Labour Party and ends the contentious career of Jeremy Corbyn. 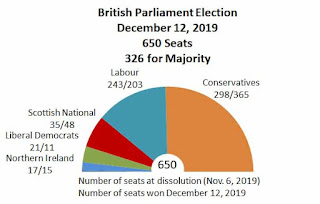 The message for the U.S. is that nationalism is still running hard, especially when led by a wily populist leader. Globalism remains on the defensive as does immigration. Democrats need to be mindful of the narrow appeal of the socialist playbook of taxes and government expansions. In terms of domestic issues, health care was the most frequently mentioned.

Other big winners in the election were Donald Trump, Johnson’s nationalist friend; Vladimir Putin for a weaker EU and a more isolated Britain; and secession as the Scottish National Party picked up seats.

Brexit is a good feeling; it may be a bad idea.

As posted on Wednesday:

Brexit is expected to have a major impact on the British economy, especially its trading relationships, and could affect the long-term viability of the EU and the unity of Great Britain.