Homelessness is Becoming a Political Crisis

The number of homeless people has been surging across the country, public concern is high and politics – both right and left – is beginning to respond.

Depending on how homelessness is defined and reflecting the difficulty of counting people with no home or stable address, there is now more than 500,000 homeless in the country, with a quarter of them, 130,000, in California, and 60,000 in Los Angeles alone. But, communities across the country – large and small, urban, suburban and exurban – are all struggling with the surge of homeless individuals and encampments.

Politicians have been applying available tools, such as food kitchens and banks, temporary shelters, affordable housing funds and as many health resources as can be afforded, but the numbers continue to surge and the sight of people camping on streets, sidewalks in front of businesses, underpasses and parks has raised public awareness and demands for action. As the solutions of urban leaders and homeless advocates don’t seem to be working, alternatives from the populist right are starting to be heard.

A recent poll by the Washington Post shows a popular mayor, Muriel Bowser (67% approval), being judged doing a “not good” or “poor” job on “addressing homelessness (61%). The issue is ranked as the third biggest problem by voters after affordable housing and crime and violence.

Denver voters, who gave Hillary Clinton 74 percent of their vote in 2016, crushed an initiative labeled as the “Right to Survive” by homeless advocates. It would have made policing homeless encampments nearly impossible and legalized homeless camping on public spaces, including parks. The 2019 decisive defeat reflected not heartlessness toward the homeless, but a broad based viewpoint that a legalistic solution creating a right to camp on public space was the wrong approach. Many homeless service organizations and liberal advocates opposed it. In the election, growth, quality of life and public safety were important issues, and the surge of homelessness was considered a significant problem. 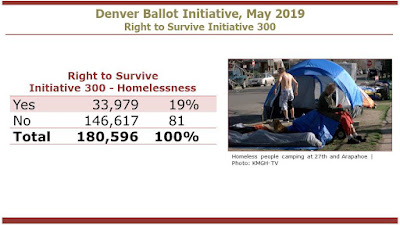 Los Angeles’s homeless population is now the size of a small city (60,000), with highly visible encampments on public and private property appearing more or less permanent. A recent poll in the Los Angeles Times, cosponsored with the Los Angeles Business Council Institute, and involving the UCLA Luskin School of Public Affairs (conducted by Peter Hart, Hart Research Associates, Oct. 15-22, 2019, 901 LA voters), identifies homelessness as the number one issue rated as serious or very serious by 95 percent of the public ahead of congestion and housing affordability. The public understands it’s a complex problem and they express considerable sympathy, with nearly a third reflecting that they have been homeless or sometimes felt threatened by loss of shelter.

But, after approving a $1.2 billion housing bond in 2017, there is a growing sense the problem is getting worse and having a negative impact on safety, health, quality of life and property values. As frustration rises, the public looks increasingly toward law enforcement solutions in spite of court decrees, settlements of law suits and regular protests that limit police-like solutions. However, if a Denver-type initiative was placed on the ballot, it’s certainly possible 60 percent or more of the public would say no, there is no legal right to camp. And, 65 percent of LA voters believe the police should be more involved in cleaning up the streets to deal with health issues from unsanitary encampments (see polling questions below). 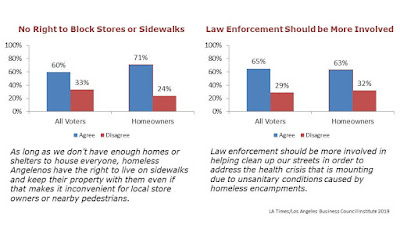 Local government has the first line responsibility for addressing the issue, and from small beach communities to major metropolitan areas, the problem is starting to move the political plates. If the liberal establishment can’t provide solutions, conservative populists will step in.
Posted by Floyd Ciruli at 9:55:00 AM

If Los Angeles has 60K homeless why don't we ship Denver's homeless there?
LA would never even notive.