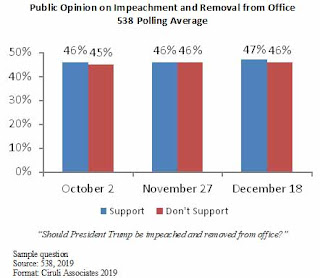 The vote for the articles of impeachment was nearly perfectly aligned with House partisanship, with 100 percent of the Republicans opposing it (195 both articles) and 99 percent of the Democrats in support (Article I – 229, 2 opposed; Article II – 228, 3 opposed). Only three broke ranks. That vote closely mirrors the public’s position, which on December 18, was divided nearly as uniformly as House members, with 84 percent of Democrats in support, but only 9 percent of Republicans (nearly 90% opposed). 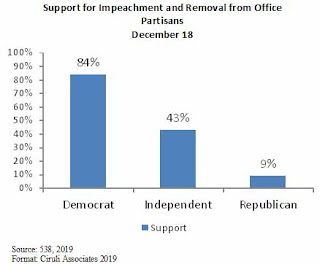 President Trump’s approval rating as of December 18 is 44 percent, slightly higher than the last few months, and he is campaigning by Twitter and rallies, especially in battleground states (Michigan, Wisconsin, Pennsylvania and Florida).

As of today, Trump has not suffered any loss of approval and impeachment opinion is locked in the partisan divisions that characterize every aspect of American politics.
Posted by Floyd Ciruli at 11:55:00 AM