British Election Will Decide Fate of Brexit (and EU, GB?)

The December 12 British Parliamentary election will likely decide the fate of Brexit and lead to the implementation of the withdrawal deal on January 31. Although a broad outline of a deal was approved by the 27 nations of the EU, there will be a year or more of intense negotiations on the details of the agreement. Although polling on the British Parliamentary election is notoriously difficult, late polls, which have been tightening, indicate that the Conservatives, led by Boris Johnson and his slogan, “get Brexit done,” will win more than 40 percent of the vote, translating to a majority of seats (about 339), projecting a range from a low of 311 to 367 (need 326 to form a majority government). 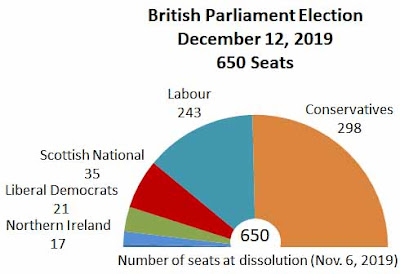 Although Brexit is the primary issue on the agenda, Johnson moved the Tories away from the austerity policies they were noted for and campaigned on more spending on national health care, child care and the environment. As a populist, Johnson mainly campaigned against the governing gridlock that has characterized the recent history of parliament.

Brexit is expected to have a major impact on the British economy, especially its trading relationships, and could affect the long-term viability of the EU and the unity of Great Britain.
Posted by Floyd Ciruli at 1:38:00 PM