The 2019 off-year turnout of 1.57 million voters beat the last high of 1.4 million in 2013. Voter participation in off-year elections is driven by contested ballot issues, high expenditures for advertising and GOTV efforts. In 2013, Amendment 66, the $1 billion income tax increase for education, spent $11 million, mostly by the proponents. It lost by 2-to-1. In 2015, there were non-controversial issues (marijuana tax) on the ballot and no statewide issues. This year, Proposition CC lost by 7 percent and total expenditure will be at the $7 to $8 million level. 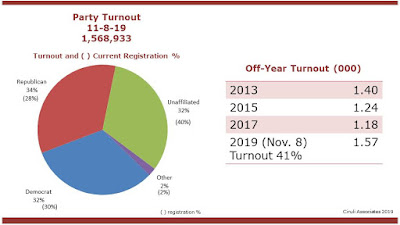 A record number of unaffiliated voters turned out. The early voters joined Republicans in voting “no” on Proposition CC, but the late Election Day unaffiliated vote went with the Democrats and closed an Election Night reported gap of 10 percent down to 7 percent on Friday after the election.