In the September 18 Iowa poll of caucus goers, who will start the run into the 2020 caucuses and primaries on February 3, Elizabeth Warren was ahead of Joe Biden, 22 points to 20. The biggest loss of support was registered by Bernie Sanders, down 5 points since the June CNN/Des Moines Register/Media.com poll. The poll was conducted by Selzer and Co, Sept. 14-18, with 602 caucus goers by phone. 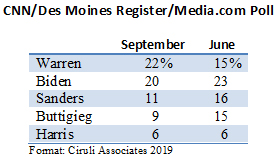 New polls in New Hampshire and California show the same shift with Warren now in the lead in both states.

Iowa is not typical of the Democratic Party’s makeup, but often has massive impact on the frontend of the race. Barack Obama won it in 2008, and in 2016, Hillary Clinton (49.8%) and Bernie Sanders (49.6%) tied. It is a mostly white, middle- and upper-class Democratic electorate that is highly liberal in its policy preferences, although in 2020, tempered by a near desperate desire to defeat Donald Trump.

Reflecting the latest polls, including a couple of national polls showing Warren ahead of or closing in, Biden (27%) remains only 4 points ahead nationally, with the new second-place candidate, Warren (23%), and Sanders now in a double-digit third-place (18%) (RealClearPolitics, Sept. 30, 2019). 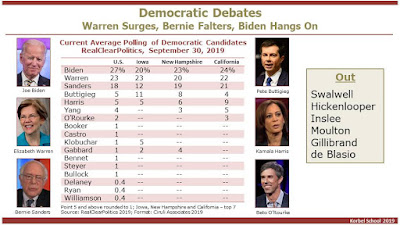 Colorado’s primary is one month later than Iowa’s on March 3, Super Tuesday, with 15 other states. The state’s only candidate left in the race, Michael Bennet, did not receive enough first-place votes out of the 602 interviewed in Iowa to round to one percent. Should Mr. Bennet give it up? Does Biden’s downward trajectory create a new opportunity for Bennet? How does, if at all, impeachment change the calculus?
Posted by Floyd Ciruli at 4:31:00 PM