Republicans represent 28 percent of registration, but are currently 39 percent of the turnout in the October 28 report from the Secretary of State, 8 days before Election Day.

Currently, about 11 percent of registered voters have returned ballots. Off-year elections tend to have lower turnout than even numbered general elections. But the pace of return of ballots so far this year is ahead of off-year elections in 2015 and 2017. However, those two elections were without contested statewide ballot issues. The most recent high point in an off-year election turnout was 2013 when Amendment 66, a billion-dollar tax increase for education, generated over $10 million in campaign contributions from supporters. Turnout was 1.4 million and it lost to a modest opposition campaign by two-to-one (64%). Turnout in 2015, when a little contested marijuana tax was on the ballot, attracted 1.2 million voters and 1.1 million in 2017 when no statewide propositions were on the ballot. 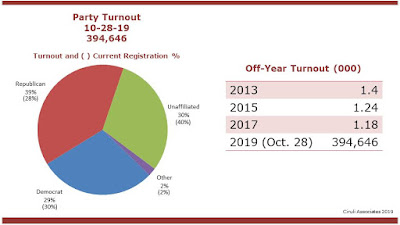 Jefferson County has the highest early metro turnout, with El Paso tops in the state. Half the vote so far is from Baby Boomers (55-74). They are the largest voting group (52%) and Gen Y and Z (Millennials) (≤40) the lowest (12%). 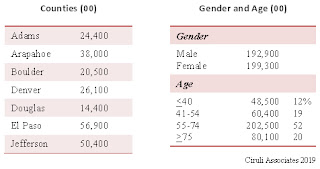 It is too early to draw any conclusion about local and state propositions, but liberal positions on issues and where it’s a factor for municipal candidates will require Denver and likeminded unaffiliated voters to assist them to overcome the high Republican turnout (proportionally) in off-year elections.