Impeachment Opinion is Moving, But Not Trump’s Approval

Action tends to be better in politics than reaction, and Democrats now have charged into what will likely be the dominant political story for the near future. Congressional hearings through the holidays, a new lead topic at the presidential debates, possible changes in the line-up, and a potentially competing story for next year’s primaries.

Public opinion will be a key factor to watch as the parties and personalities struggle to control the narrative. The ratio that has dominated the Trump presidency is 40/55. The President’s approval and disapproval have ranged within 3 to 5 points, plus or minus of those numbers. As the impeachment process continues and time for the primaries closes, presidential approval, support for impeachment and the President’s head-to-head numbers will be key indicators as to the impact of impeachment on the election. Very importantly will be the movement of Republicans, both voters and elected officials. The following are some early numbers. 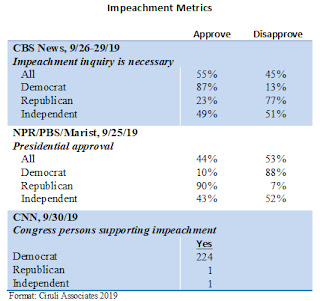