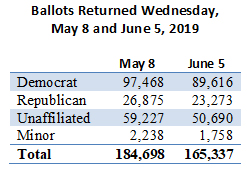 The percentage of turnout among independent voters fell off a couple of points and Democrats went up. But in general, turnout was down across-the-board among partisan groups. Overall turnout was 41 percent of 407,140 registered voters. Runoffs often attract more voters, but not always. Turnout was down in Wellington Webb’s and John Hickenlooper’s first runoffs.