Can Hickenlooper Make the First Debate?

Unless John Hickenlooper does a 180-degree turn, he will announce his campaign for president soon. Along with all the usual metrics of staffing, fundraising, local primary state endorsements and the ubiquitous polls, Hickenlooper’s greatest challenge may be staying viable to get on the stage at the first Democratic debate now scheduled in June.

As opposed to the schedule in 2015, which was arranged to limit exposure for Hillary Clinton’s competitors, especially Senator Bernie Sanders and former Maryland Governor Martin O’Malley, the 2019-20 rules are much more friendly to longshots, at least initially. Democrats will not use polls (or at least not primarily) to determine who gets on the stage or where they will stand. Of course, in a wide open format, with maybe more than a dozen candidates in multiple events, the challenge for the Democrats will be to hold an audience and for the candidates to stand out. 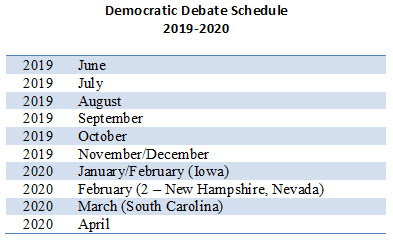 Republicans held a series of debates in 2015 and 2016 that greatly shaped the field and became a powerful forum, which Donald Trump used to his advantage. Polling dominated the process. It was used to select the top candidates for the prime time debate and a second debate for lower scoring candidates (the undercard).

As the picture of the first debate, sponsored by Fox News, on August 6 shows, polling numbers also placed the candidates on the stage. Trump, with his low double-digits polling results, got the middle spot, whereas Governors Chris Christie and John Kasich were placed somewhat precariously on the far right and far left, respectively. This was generally known as the Megyn Kelly debate due to the wild interaction between Kelly and Trump, which was a prelude to what would become a norm-defying and unprecedented primary season.

At least seven candidates have declared or started exploratory committees. Another 10 (or more) are considering a run or rumored to be seriously interested. That includes two from Colorado – John Hickenlooper and Michael Bennet.

Let's hope that HIck is smart enough not to even enter the race.
Let's hope that if he does, then he drops out early.
He is too old, too boring. But, a really nice guy and was an excellent mayor and governor, in my opinion.