The Democratic Frontrunners: The Three B’s – Biden, Bernie and Beto

The first Des Moines Register poll is out (with CNN), and of the 30 or so Democrats running for president, twenty were tested and Joe Biden, Bernie Sanders and Beto O’Rourke are at the top of Iowan Democrats’ preference. It is more than a year ahead of the first in the nation’s Iowa caucus, but the polls are starting as are the campaigns (Hickenlooper had 1%). 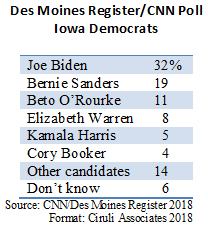 Biden’s early advantage is that he simply has the top name identification, but he also represents the pragmatic, we need experience concern that Democrats have given President Trump is the non-stop attack campaigner.

Sanders hasn’t stopped campaigning after losing to Hillary Clinton in 2016 and has a base of more independent and younger voters who like his outside status and generous plans for reshaping America. Although his views appear somewhat antiquated, like a dog-eared copy of “Das Kapital,” they received a shot in the arm from the out of left field win of socialist Alexandria Ocasio-Cortez in the 2018 New York primary.

Beto O’Rourke is the Obama of the 2019 field. He ran a spectacular, although losing race in the state Democrats would most like to win - Texas. He has looks and a manner that draws crowds, and possibly most important, he collected millions of dollars of donations online and from national donors.

Needless to say, it’s early with a massive field of candidates. If 2016 was a surprise, both for the path to nomination and the election results, this one will likely be just as unpredictable.

Two of the top 3 are too old.
The Dimocrats need to set a maximum age limit of 56.
Time for the Boomers and Oldsters to exit the stage and let the Xers take over.