The August 2017 congressional recess feels like the history-making 2009 recess. In that year, the Tea Party got its start going to congressional town halls and offices to express their supreme dislike of the early drafts of Obamacare.

Although Obamacare didn’t pass Congress until the next March, the movement had momentum and Democrats began to recognize they were in trouble. They lost two governorships in November 2009, Ted Kennedy’s open Senate seat, and then in November 2010, a record-breaking 63 House seats.

Republican congresspersons are in trouble from disappointed conservatives who wanted Obamacare repealed. In addition, the high profile collapse of the bill damaged Republicans with voters who actually depend on Obamacare insurance. Possibly most importantly, their agenda has lost credibility and their rationale for having control of the government to get things done is no longer believable. Gridlock is back.

Off-year elections are typically difficult for the presidential party and can be a disaster in the first term if presidents are in trouble. Bill Clinton and Barack Obama had terrible first midterm elections. Clinton lost the House for the first time in 40 years and Obama lost it back to the Republicans after holding it for only four years. 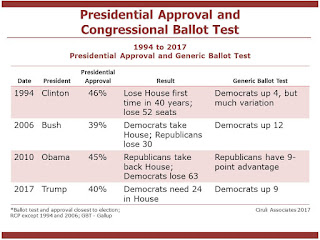