A Bipartisan Movement on Health Care

The public claims it supports a bipartisan approach to health care legislation now being attempted by a group of independent-minded congresspersons. Seventy-seven percent of Americans tell CNN pollsters that “Republicans should work with Democrats to pass a health care bill.” Only twelve percent said go it alone. In fact, sixty-nine percent of Republicans said go with bipartisan approach. 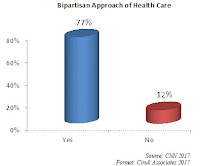 A bipartisan coalition of the House of Representatives has proffered a plan to stabilize the Obamacare markets to ensure the ACA doesn’t just collapse. This bill has a number of significant elements, but it faces a leadership in both parties that must deal with members committed to completely repeal on the right to single-payer on the left. In Colorado, Representatives Coffman and Polis have been listed as members.